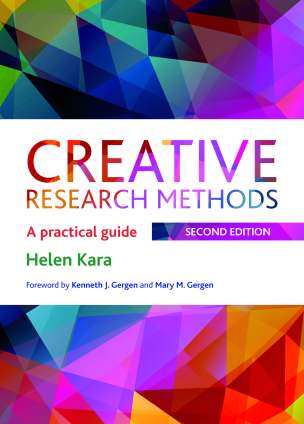 The field of creative research methods is exploding, and the changes to the second edition reflect the speed and extent of the field’s development. Almost all of the first edition content is still present, apart from a few edits and one or two citations which have been superseded by later work. And there is a lot more. Five new chapters, over 35,000 new words, and over 200 new references. And a new cover – isn’t it gorgeous?

Also some of the emphases within the book have been rebalanced. One proposal reviewer said they didn’t think there was enough in the first edition about research using technology; another said they would like more on creative approaches to quantitative methods. I wanted more examples from the global South. These have all been addressed.

The attentive reader may notice that the title has changed. The first edition was called ‘Creative Research Methods in the Social Sciences: A Practical Guide’. That title always annoyed me; it should really have been ‘Creative Research Methods in the Social Sciences, Arts, and Humanities, and to some extent STEM subjects as well’ but that was too unwieldy for a book title. This second edition is truly interdisciplinary so we’ve dropped the ‘social sciences’ tag, but we’ve kept the subtitle because the book is as practical as ever. It won’t answer all your questions – no book could do that – but it offers a fairly thorough guide to the options available, and is carefully referenced to help you find more information on topics of interest.

Sorting out the new structure was a massive headache and it took a few iterations before we arrived at the final result. The first part of the book has expanded from four chapters to five, with a new chapter on ‘transformative research frameworks and Indigenous research’. The second part has expanded from five chapters to nine. Data gathering, data analysis, research reporting, and presentation now each have two chapters, one covering arts-based and embodied methods, the other covering technology-based and multi-modal research.

As this suggests, my conceptualisation of the field has also changed in the light of recent literature. The first edition identified four ‘pillars’ of creative research methods: arts-based research, research using technology, mixed-methods research and transformative research frameworks. The expansion of the field over the last five years has led to the inclusion of embodied research as a fifth ‘pillar’. These are not mutually exclusive; creative research often falls into more than one, but they offer a useful way to help us think and talk about a highly complex interdisciplinary field. Also, thanks to the suggestion of an anonymous manuscript reviewer, the term ‘mixed-methods research’ – with its implication of quant data + qual data – has been replaced by ‘multi-modal research’. This term reflects the point made in the first edition, and now more widely understood, that methods may be combined within quantitative or qualitative research alone, and at any stage of the research process.

I’m really excited about this second edition and I hope you are too. It will be published in September and is available for pre-order now. I have developed a two-day course based on the book’s content, in conjunction with the UK’s National Centre for Research Methods, which we will run when everyone can move around again. Also, I am currently developing online versions in collaboration with universities in the UK and Australia. If you are at a university which would like to book me for a course, do get in touch.