I wrote a post, a while ago, about the difficulties I experienced in letting go of a piece of writing. I can also find it difficult to let go

One of the things I’ve been doing for #AcWriMo this year is working on an article for an academic journal, about the role carers can play in mental health research. The role service users can play is fairly well established now (which is not the same as it all being plain sailing) but there is clear evidence that service users’ participation will benefit the research itself and everyone involved. There is no such evidence for carers, who are often ignored or sidelined by service providers, researchers, and others, yet I believe that carers also have a unique and valuable role to play in mental health research.

According to the literature, so do a few others. I’ve found some articles which are directly relevant, primarily from the Australian region of Victoria, and some others which are peripherally relevant, from various places. I’ve probably found enough. But there’s a niggling anxiety that maybe, just maybe, there’s a crucial, seminal article somewhere which I just haven’t found yet.

When I did my PhD, I read from two bodies of literature: work on emotion (huge, over more than a century, no chance whatsoever I could read it all) and partnership (comparatively small, over a decade or two, I could definitely read most of it). That was an interesting experience. I read as much of the partnership literature as I could lay hands on, and a more targeted selection of the emotion literature. One key emotion text was published during my doctoral studies, and I didn’t find out about it until I was close to the end. I read it swiftly, and banged in a few references, but my examiners turned out to be dastardly clever and very much on the ball. They pulled me up for not having considered the writer’s arguments with sufficient care, and made me go back and read and cite her work again.

This has left me with a dread of reading inadequately and being found out. And there is so much out there to read! Journal articles, grey literature, chapters, whole books, and more being publ 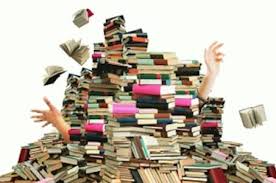 ished every day. I can end up spending hours devising new search terms that might just uncover one more relevant piece of text. For a journal article it’s not possible to review all the literature, as you might for a doctoral thesis. But reviewers and editors will expect a writer to have a good understanding of the literature in the field, and to be as familiar with recent developments as with the seminal pieces of work.

And that’s my guideline. Do I have a good understanding of the literature, which includes recent developments as well as key texts from longer ago? If the answer is ‘yes, I think so’, then I can stop reading. While I may still have missed something relevant, it’s over to the reviewers, then, to point that out. And after all, if I carry on reading for ever, I’ll never get any writing done, and what use would that be?