Having got my creative research methods book safely launched, and cleared away most of the smaller writing projects that piled up while I was writing that, I’m slowly starting to get into gear for my next book. I’ve written several books now, including two on research methods, and the process for each book is different. For my first research methods book, essentially I wrote down what I knew about research methods and doing research, worked out where the gaps were in my knowledge, learned what I needed to know to fill those gaps, and wrote that down too. The second one was more of a stretch (at one point I found myself whingeing on Facebook about ‘that difficult second research methods book’) but primarily involved collation, as there was a huge amount of relevant work in journal articles and a few pertinent books. It did involve some hard thinking – in fact, they both did but, like childbirth, the pain is soon forgotten.

Unlike childbirth, I expect the labour for my third research methods book to be more painful than for either of its older siblings. This is because my third book will be on ethics. Writing down what I know about ethics wouldn’t take long, and collating other people’s work on ethics would be fairly pointless. For this next book, I need to read, and think, and take it slow, and learn, and think some more, and come up with some new and different ideas and approaches. My embryonic ideas are that I want to show how research ethics is linked with wider-world ethics, at individual, institutional/organisational, and national/political levels. Also, I’d like to unpack the impact of wider-world ethics on ethical thinking, acting, and decision-making in research. This may be ridiculously ambitious, but it feels compelling; it’s something I want to understand, and would like to communicate in a useful way. 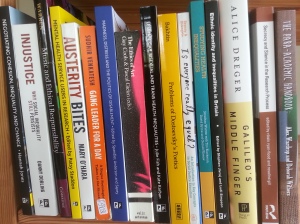 So far, I’ve collected a load of books and some journal articles. I’ve read about a third of one book and about a quarter of another. I haven’t written a word yet, and have barely thunk a thought. I haven’t blogged the process of writing a book before, so this is new, too. It’s quite difficult to write about a process from such an early stage that I don’t really know what I think yet. Also, publishers tend to advise authors to keep ideas close to their chests, in case someone else steals the idea and writes the book faster and better than the author can. So blogging the process feels a bit weird – but I figure this is hardly a commercial bestseller in progress, and it’ll be more useful all round if I share my ideas rather than keeping them to myself.

I’ve started interviewing some experienced researchers, in academia and in practice, to find out how they get on with trying to do ethical research. I want to learn some stuff about how this works, both in terms of research ethics governance and ethical review, and in people’s actual practice. I am regularly frustrated by the over-emphasis on ethics at the data-gathering stage, and the narrow focus on the welfare of participants, at the expense of ethical considerations at other stages of the research process and the welfare of people other than participants. In my view, there are ethical considerations to take into account at all stages of the research process, and everyone touched by a research project deserves to be thought about and cared for. That includes researchers themselves: research can be a stressful and difficult undertaking, and we do nobody any favours if we don’t look after our own welfare as well as that of others.

Remember when I said writing down what I know about ethics wouldn’t take long? That’s pretty much it. Well, OK, maybe there’s a little more. I could probably pontificate about deontologicalism versus consequentialism for a sentence or two, but I’m not that keen to lose readers. This reminds me of another aim for my book: that it should be readable. I talked to my partner about this recently, and he suggested I have an early chapter called ‘The Academic Verbiage’ (actually he used a rather less polite word than ‘verbiage’), so I could put all the complicated words in one place. Then, he said, I’d be able to write the rest of the book in ordinary language. I’m not sure I’ll go quite that far, but I do intend to try to make it clear and understandable. At least, I hope I can…