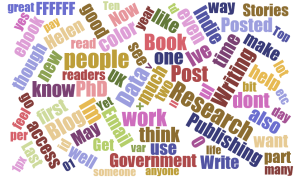 word cloud of this blog, to date

A generation ago, women lobbied for changes to terminology which gave the impression that men were dominant – as indeed they were in Western society at that time. Up to 1978, for example, a woman could be fired from her job in the US for being pregnant, and up to 1982 UK pubs could refuse to serve women. But at the same time, women were beginning to take roles traditionally assigned to men, which led to some linguistic oddities. I remember feeling rather uncomfortable with being designated the ‘chairman’ of a committee, when ‘chairperson’ or simply ‘chair’ would have served as well. There were fierce arguments between those who believed that traditional language use supported the discriminatory status quo, and those who thought it made no difference.

Some people went further than I thought was sensible, replacing ‘history’ with ‘herstory’ (I can see the point of that in some circumstances, but the etymology of the word suggests that it’s much more about the ‘story’ than the ‘his’) or ‘woman’ with ‘womyn’ (I didn’t get that one at all). This kind of terminological tinkering led to the phrase ‘political correctness’ being used to discredit all attempts to replace sexist terms with existing, sensible, neutral terms. I still wince when I see reports of women ‘manning a stall’ – what’s wrong with ‘staffing’? But it’s now quite usual to speak of a ‘police officer’ rather than ‘policeman’ or ‘policewoman’, and a ‘flight attendant’ rather than an ‘air hostess’ or ‘steward’. These changes in terminology have moved in parallel with increasing opportunities and equality for women in the Western world over recent decades.

However, there is some new terminology that I think is unhelpful for some sections of society. I read an interesting article in the Guardian last week in which the non-fiction writer Steven Poole gave a very thoughtful analysis of the unintentional difficulties caused by the phrase ‘first world problems’. The article is worth reading if you have time. He shows how the reductive use of ‘first world’, with its implicit opposition to the ‘third world’ (which is itself an unfashionable term these days), enables people to condescend, patronise, humblebrag, sidestep compassion, and generally dehumanise pretty much everyone.

Also last week, on social media, I questioned someone’s use of the American phrase ‘wife beater’ to describe a sleeveless t-shirt. I’m not naming the person here because they didn’t welcome my questioning and I don’t want them to think I’m trying to start some kind of online war. The person I questioned is someone I follow because, in my view, they do valuable work online to highlight social inequality. Their casual use of the phrase ‘wife beater’, with its implication that domestic violence can be acceptable, seemed to sit oddly with their pro-equality stance. I am sure this was unintentional on their part; I can think of a number of other words and phrases that I’m sure they wouldn’t use at all because of the discriminatory implications.

Another one is the new-ish way of designating something as in some way poor by saying ‘it gets old really fast’. I am getting old, rather faster than I would like, and I am becoming increasingly aware of the discrimination and difficulties experienced by the older members of our society. I would prefer colloquial usage of the word ‘old’ to have positive connotations.

These examples have become stock phrases, akin to cliches. And cliches are evidence of lazy thinking. All this has implications for us as writers. Writing is a creative process, and that includes academic writing. Stories must be told, words and structures chosen, and these processes are permeated with creativity. Academics, altacs and researchers, earn our livings with our brains. I would argue that we have an ethical responsibility to avoid the lazy cliche and express our new thinking in fresh language. Also, we should try to remain aware of the potential effects of our creative choices on our readers. It is our responsibility to ensure, as far as possible, that we don’t use language in a way that could support discriminatory actions or practices.