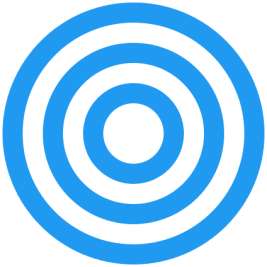 Most people, when they think about gathering primary data for research, think of the ‘Big Three’ methods: questionnaire surveys, interviews, and focus groups. This is rather limiting when there are so many other methods that can help to answer research questions. One example is concentric circles. They are used quite frequently in market research, and have also been used in social research for several decades, yet I am frequently surprised to come across people who have no knowledge of this approach.

Concentric circles are generally used to investigate people’s relationships with other people, objects, or phenomena. There are two main ways to use concentric circles. One way is to put something at the centre – in market research, usually a product or brand – and ask the participant to make a cross, or drag-and-drop a digital image, to a point within the circles that they feel represents their closeness to that product or brand. So, for me, if the brand was Nestlé I’d put myself right on the outer edge, whereas with a product such as the Co-op’s fairly traded wine, I’d be close to the centre.

The other option is to put the participant at the centre, and ask them to use the concentric circles to map relationships such as the people or agencies who support them, with those they feel closest to placed nearest to the centre and vice versa. This can be done in evaluation research as part of a pre-post design to document changes. For example, if part of the point of a service is to act as a gateway or signpost to other relevant agencies, it might be useful to ask users of that service to map their relationship with other agencies at the first point of contact, and again after a suitable period of time. That would help to assess the impact of the service in increasing users’ links with other agencies.

The concept of this is easy for participants to grasp, perhaps because the circles provide a recognisable structure but are not prescriptive. They are appealing because they give the participant a lot of choice and flexibility in how they respond. This avoids difficulties that can be raised by a standard type of research question such as, ‘How supportive is your spouse or partner?’ Some participants would find a question like this difficult to answer, say if their spouse or partner was unsupportive, or abusive, or recently deceased. If such a participant met this question in a survey, interview, or focus group, at best they would provide no or inaccurate data, and they could suffer serious embarrassment or upset. However, with the concentric circles, a participant can choose which of the people in their lives they include in the discussion.

Perhaps because of their ease and sensitivity, concentric circles have been used effectively in research with children, the elderly, and people with learning disabilities, among other groups. They are rarely the only method used, but they add an interesting and useful dimension to an investigation. In fact, the potential applications of concentric circles are many and varied. For example, they could be used in:

And that’s just off the top of my head.

Completed concentric circles can provide powerful illustrations for research reports and presentations, although care should be taken to ensure that participants and others who may be mentioned cannot be identified as a result. One option here is for a researcher to recreate a participant’s concentric circles with different names and/or with changes to other identifying details.